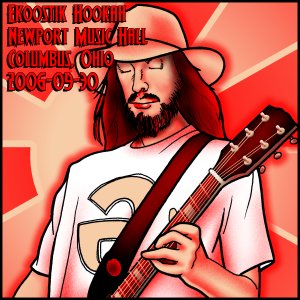 Reviewer: OriginalGansta - favorite - March 4, 2007
Subject: One Last Comment
First off, name calling is unnecesary. If you like the recording great, if you dont, great. But why do some folks feel they need to pass judgement on others likes?

Second, if audience noise is so great, why dont you ever hear a band release a live recording with a matrix feel to it? Because it sounds like crap. Listen to Hookahs first live release, a double CD thats awesome. The crowd comes in before and after songs, but is thankfully removed during the music. I guess you have to choose between the importance of "being there" and hearing the music the way the band intended.

Reviewer: O Hi Again - favoritefavoritefavoritefavorite - December 10, 2006
Subject: sound quality isn't everything...
I agree with many of the comments from alturion regarding the sound and quality; this recording makes you feel like you're there...
now and then i have heard less than spectacular schwa recordings, but the important thing to remember about this band is that FEELING counts for 99% of why we download and cherish shows...because we were there, in person and/or in spirit. sound quality is a relatively negligable consideration. I can appreciate a great recording, but let's not take this band's efforts for granted, as the sound quality snobs would have you....

listen because it feels good, not because it sounds good.
sorry for the rant, but bro & sis, we need to be grateful we are lucky enough to have such a sweet native Ohio band... (back together again!)

Thank you to the archive for its service...

Reviewer: arturion - favoritefavoritefavoritefavorite - November 19, 2006
Subject: A great BLEND
The sound quality and the live sound of this show appears to be under fire from many of the "reviewers" here. Having listened to a good amount of Hookah recordings and seen my fair share of shows, I have to disagree entirely.

First off...matrix recordings are a BLEND of the audience and soundboard sources. This BLEND is created by the taper to the taste of said tapers ear.

Personally, I would much rather hear a matrix recording favoring the audience source as opposed to focusing entirely on the STERILE soundboard feed. The sound of the room, the venue, the crowd, are all just as much a part of a great matrix recording as the music itself. I feel that all of these factors are definitely evident on this recording and make it that much more REAL to listen to.

The music...the inclusion of the soundboard source mixed in allows us to hear all the instrumentation and vocals much better then just the audience. What can't you hear? I hear Sweney blazing across the top, Daves keys are in there, drums and bass are not hollow sounding. Vocals are at a great level (not blaring loud like a lot of soundboards you hear).

If I had one criticism, it would be that Mullins doesn't turn his guitar up loud enough. But we certainly can't blame the taper for that now can we?

And the comment here about Hookah having a sound problem. Dan Mesnard is one helluva sound technician. I've heard him really pull some pearls out of quite a few crappy oysters when it comes to venues that Hookah has played at. And when it comes to the Newport...the guy is top shelf.

Now the show itself...which hardly anybody hear has even bothered to comment on....

Mullins has an affinity for John Hiatt and it's great to hear him bring that to Hookah with "Memphis in the Meantime". Substantial rendering of the tune here...but I feel it can definitely get better with time.

Cliff's take on Highway 61 is a refreshing addition. His phrasing on the lyrics is perfect. The driving leads from Sweney turn this tune into the proper foot stomping countrified rock n roll boogey feel.

Caribou is a great tune, but I cannot get behind the slow tempo they use on this particular evening.

The gem in this show is definitely "Sun Goes Down". Having watched this tune rise up from it's infancy with Ed in the band....change flavor with John....and learn to fly with it's new wings, I can honestly say it's Hookah's defining song nowadays. The vocal exchange between Cliff and Dave is excellent. The country leads that Sweney is pulling off on this particular version are fluid and exploratory.

Change coming back is absolutely fantastic. I have always loved the flow from frenetic rocking to the ballad portion of the song and then back again into a distictivly tribal feel. I love Cliff's basslines here. Dave's vocals shine on the "Make a change" coda. And Sweney oozes his hear and soul onto his sleeve during the melodic leads on the slow portion of the tune. Seems the whole band really gets into playing this nowadays. I like it.

Steeped in Tears is my favorite Mullins tune played by the renewed Hookah lineup. The intensity of this tune really reaches a nice level on this evening and the room was mesmerized by Sweney's guitar acrobatics once again.

Chicago is one of my all time favorite Hookah tunes...and this was a competent version but by no means the best I've seen them do. Didn't get weird enough for me.

Finally...hang up the Pink Floyd. While played competently it's gotten stale as encore material and would much rather see other songs put into this spot. Reminds me of the "Don't Do It" encore habit from the previous lineup. Good tune, played well, but new territory for the encores would be a welcome change.

All in all...Sound Quality gets a four. Show would get a three. And on a parting note...tapers put a lot of energy, funds, time, and frustration into bringing these shows to you folks. If your going to give a show a poor rating..AT LEAST BRING SOME SPECIFIC COMMENTS TO THE TABLE.

*great show,decent recording*
Reviewer: yendog - favoritefavoritefavorite - October 6, 2006
Subject: i have to agree
this sounds pretty bad.... i am great friends with a buddy that plays in Guest. I was back east visiting him (i live out west now) and he said they were playing with Hookah and it was the original lineup. I was stoked!

then i saw this up there... saw a good review.... saw it was Matrix (that are DEFINITELY the best recordings when done well) and dowloaded this.

It sounds terrible.... i really want to hear a good copy cause i lived in ATHENS and this was a band that really was a big part of me (back when mullins was in it)

this tape couldnt sound any better
Reviewer: mikesiebieda - favoritefavoritefavoritefavorite - October 2, 2006
Subject: Recording sounds great to me.......?
I think that the recording sounds great. I am not expecting to hear some studio quality recording comming off of the Archive. I am just happy i can have a copy of the show that i attended. Thanks TC. This show was very good, and had some ups and downs. I thought Opener was excellent choice. My highlights were, WRF,UFS,CHANGE,PIGS,OH. Grown, and Sun GOes DOWN. Those two had some intense energy flowing through the Newport. Felt good to welcome them back to the 2nd home of Ekoostik Hookah. Seems to be a 4 star show to me. 5 is hard to achieve. Bring on Mr.Smalls 11/22/06..HOOOOOOOOOKAH